Who can enter the awards?

Businesses who have franchise outlets, or multiple offices are encouraged to enter each office separately. This is because these offices are often location based with different staff at each, which means we must be able to assess the customer service delivery of each particular office and its staff. We offer free corporate reporting to businesses who enter 5 or more offices, and group certification if each office scores over 80%. Speak to us to find out more.

What do we have to do to enter?

Entry is simple and takes very little time. All you are required to do is create a business account on the Australian Achiever Awards website, where you provide your business details including contact information, and then the names and phone numbers of four customers and one trade supplier. You will have login access to your account and can save and edit the information before it is submitted. Ensure you let your contacts know we will be calling them, and then submit your entry and pay the administration fee. Payment is taken through the secure portal on the website (your credit card details go straight to the bank and are not seen by us) or request to pay by EFT/direct deposit and you will be issued an invoice for payment.

What do you mean by ‘Trade Supplier’?

We do not do a credit check. The questions we ask are predominantly relationship and referral oriented. Your trade supplier contact is anyone who you purchase products or services from for your business. It could be a printer, office supplier or even your accountant. We ask you for a trade supplier contact because we treat them as an internal customer. The way you treat your suppliers gives us an additional measure on your overall attitude towards relationships with everyone you have contact with. The weighting given to the trade supplier score is about 10% of your overall rating.

I don’t like imposing on my customers. How long do you keep them on the phone?

We understand entirely that your customers are very, very important to you. Our phone call takes about two to five minutes to complete with someone who is busy. And about two minutes with your Trade Supplier. More often than not, your customers will spin the conversation out because they are keen to assist and want us to understand exactly what they are saying about you. Our staff remain calm, polite and friendly, whilst maintaining impartiality at all times.

Do I need to send you additional things such as reference letters from customers or a Business Presentation?

No, we do not take extra materials into account. We rely absolutely on the phone responses we get from your contacts. To do otherwise would be unfair on others, and would entail bringing our own judgement to bear on the assessment process. This is against our policy of maintaining an arms length distance from any possible subjectivity that an outsider could impose on the process.

Do you visit us, or mystery shop our premises?

No, we do not visit you. To do so would entail bringing our own judgement to bear on the assessment process. This is against our policy of maintaining an arms length distance from any possible subjectivity that an outsider could impose on the process.

Is there a minimum period a business needs to have been operating before it can enter the Awards?

We encourage that businesses should have been operating for 12 months. However, we leave this to your own common sense to determine whether you have established a consistent approach to your service levels and have achieved a base of satisfied customers. The Award cannot be abused by attempting to create an image through false references. Our methods unveil deceptiveness.

We are a very small business. How can we compete against larger, more established businesses?

We have many, many one or two person businesses that have won their category in these Awards. Quite often, being small means that you are able to establish very strong, even personal, relationships with your customers. These relationships are often the key to attitude, care and attention, reliability and trustworthiness issues. You have equal opportunity to demonstrate your commitment to your customers.

What are your credentials?

We are well known to Government authorities. We were examined by the Victorian Department of Justice Office of Fair Trading & Business Affairs when we began in 1998.

Since then, we have worked with the Victorian Department of Justice – Consumer and Business Affairs Victoria who spent five months, February to June 2001, checking all the businesses who entered over that period for any consumer complaints made against them. The outcome of that was the Department decided to cease its checking because (quote) It appears that 99.9% of the businesses do not have any problems and your techniques will pick up any of concern (end quote).

We do not seek sponsors. It’s tough, because an ideal Corporate Sponsor of these awards would need to possess an unblemished record for its own care for customers. This criterion is one which very few Corporates can claim.

In the early years we approached Government authorities for endorsement. They recognised the good we were doing but advised they could not be seen to endorse any private enterprise.

The Australian Achiever Awards for customer service excellence is an innovative idea which is viable as a self-supporting concept. Thirty plus years’ experience in Marketing, Advertising and Public Relations is enough cumulation of knowledge and skill to establish such a concept in a highly ethical manner.

The huge value of this Award is proved by all the businesses who continue to enter year after year.

What if my business has multiple offices?

If your business operates from multiple outlets you must advise us of this. If your staff work across the multiple outlets, then the one award can apply for multiple locations. However, if the different locations have different staff or are franchises, the award cannot apply across locations and each location must apply separately.

We have corporate packages available to assist with this scenario, with free corporate reporting to businesses who enter 5 or more offices, and group certification if each office scores over 80%. Contact us for more information.

What are the conditions of my entry?

We have a large number of staff. How can we compete against a smaller business?

We have many, many large businesses that have won their category in these Awards. By being a larger company, you will have systems and processes in place for how you approach your customers. This gives you consistency and gives your staff the right tools for dealing with customer relationships. We find that the key to good customer relations always comes from the attitude at the top. If the owner or manager of the business is customer focussed and has the personality that encourages staff commitment to customers, then you will find you can achieve very high levels of customer satisfaction.

The business category you have placed us in is not relevant to our business.

Some say they fit into a smaller niche segment of a category and shouldn’t be competing against others in a different niche who (a) don’t spend as much time as they have to, or who (b) spend a lot more time – with their customers.

Australian Achiever Awards are unable to sub-divide the number of categories we run over 12 months. If the category definition is important to you, we can adjust your Certificate to suit you. But, although it is good to be a Winner, the Award benefits all those that achieve, Winner and Highly Recommended alike, and remains a major promotional tool for your business.

How can you assess our customer service levels by talking to three customers and a trade supplier?

Because we are an independent organisation, your customers are more inclined to be honest and score you as they truly believe. Our assessment process is calculated over a possible total of 472 points which enables us to quantify your score with accuracy.

The proof of this is demonstrated by the results we have of the large number of businesses who have entered multiple years. For the majority, the results achieved each year are within a range of one or two percentage points. In all cases we have spoken to different customers for each business each year.

We do our own customer surveys and know we give good service. Why should we enter these awards?

You will find most customers are more frank with an independent organisation. The results we give you should better reflect the actual situation. But these measures are only part of the benefit you receive entering the Awards. The promotional advantage of being part of a groundswell of interest in good customer service is enormous. Every business that makes the most of this distinctive award to enhance their marketing and promotion by endorsing their good customer image benefits from the cumulative effect created by all who are using it.

What if my industry category has a small number of entrants?

A category must have a minimum of three entrants for it to run. If there are fewer than three entrants in a category, entries are still administered and judging undertaken. You will still receive your results notification and achieve a Highly Recommended status (if you achieve over 80%), or a State Winner status (if you achieve over 98%). Your results will then also be entered into our Australian Specialised Services & Supplies category. A National Winner will be awarded from this category at the end of the year.

How do you work out the awarding of National and State Winners?

Each category has an overall National Winner who receives a prestigious winner trophy. Most categories also have State Winners. State Winners do not receive a trophy, however they are able to use the winner logo (dated for the year they won). If a business is the only entrant for a particular state, they must achieve a score of 90% or above in order to be eligible to be titled the State Winner. All entrants who score 80% or above are able to use the highly recommended logo (dated for the year they won).

Why is there an entry fee?

Many sponsored Awards for small to medium businesses are free to enter. And many Awards are not. But, invariably, entering any Award will cost you something. Whether this is a ‘subscription’, paying for mandatory table/guest costs at a Presentation Dinner, or paying for the Certificate provided, or spending your own valuable time and business costs for preparation of a submission of some sort. The Australian Achiever Awards are self-funded and charge an administration fee to operate the Awards. The question you should ask yourself is – How much more business will be generated by this Award and will that be worth more than the cost?

The entry fee is a small investment in the future growth of your business.

The customer service mark of quality 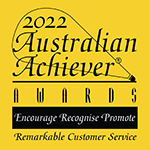